There are Porsche Panameras to hunt.

We first caught wind of what Mercedes-AMG is up to last March at Geneva when it revealed the stunning GT Concept. Although it had all the bearings of a concept, such as extra-large wheels and no side mirrors, it was pretty clear a production-spec version was in the works. Advanced prototypes are currently running, and Autocar has further learned some details about this upcoming Porsche Panamera fighter. For starters, it'll be available with both an internal combustion engine, probably a 4.0-liter twin-turbo V8, as well as a hybrid.

The latter will be the top-spec version and it's said to produce up to 800 hp. You read that figure correctly. Do a quick comparison and you'll see that it's around 230 hp more than the AMG GT R. Autocar further points out that only the upcoming Mercedes Project One will surpass the GT sedan's output, with 1,000 hp. So clearly Mercedes-AMG isn't messing around here in its quest to de-throne the likes of the Porsche Panamera Turbo, and even the upcoming redesigned BMW M5. Another thing to note is the fact that the GT sedan will ride on a reworked version of the current E-Class rear-wheel-drive platform, although it'll have a stretched wheelbase.

The body itself, however, will be longer, wider and shorter than the E-Class. The AMG GT sedan concept itself was a bit larger than the Panamera, just to give you a better idea of its dimensions. And because this is simply the trend of high-performance luxury sedans today, power will be sent to all four wheels, at least for the twin-turbo V8 version, which will debut first, probably at Geneva this March. It won't be any slouch, as it's expected to produce 600 hp. But it won't be until 2019 when the top-spec AMG GT sedan hybrid launches with 800 ponies on tap. Good times ahead, for sure. 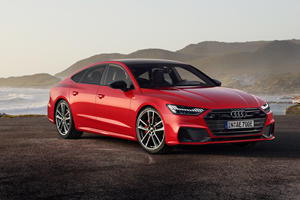