The vans will be built by the automaker's BrightDrop company.

CAMI was originally opened in 1989 to build the Geo Tracker, circumventing the US Chicken tax. The plant later built crossovers like the Chevrolet Equinox, GMC Terrain, Pontiac Torrent, and Suzuki XL7. After the second-generation Equinox left production, GM pivoted the plant to assemble the Zevo 600. The retooling began on May 1, 2022, meaning the whole transformation took only seven months to complete.

"This milestone represents GM at our best - fast, flexible and first in the industry," said GM president Mark Reuss. "The BrightDrop Zevo is a prime example of GM's flexible Ultium EV architecture, which is allowing us to quickly launch a full range of electric vehicles for our customers. And, as of today, I am proud to call the CAMI EV Assembly team the first full-scale all-electric manufacturing team in Canada."

The GM Ultimium platform underpins vehicles ranging from the Hummer EV to the upcoming Equinox EV. Perhaps it will eventually be used to replace the aging Chevrolet Express and GMC Savanah, which are rumored to be retired in 2025.

"This is a very exciting moment - a revolution in the way we transport people and goods. Today marks a huge day for BrightDrop, as we expand our footprint and begin producing the Zevo electric vans at scale, and a huge milestone for Canada on the road to a brighter future," said BrightDrop president and CEO Travis Katz. "Opening the CAMI plant is a major step in providing EVs at scale and delivering real results to the world's biggest brands, like DHL Express, who will be our first Canadian customer."

BrightDrop already has partners in the US including FedEX and Walmart, the latter of which has placed a 5,000-unit order for these delivery vans. 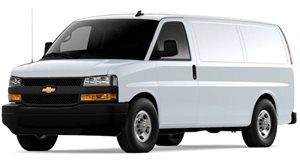