Hard Top Convertibles Could Be On The Way Out At BMW

We have some bad news for those who like hard top convertibles (all three of you). BMW Blog is reporting that a source has informed its sister publication, the German outlet BimmerToday, that the automaker is planning to cease making hard top convertibles. The 4 Series and Z4 currently sport a folding hard top. That said, the new Z4 that's being jointly developed with Toyota will have a folding soft top. The 4 Series won't see a new roof until its next generation which is still a few years off.

It'll be a bit surprising if BMW does away with hard top convertibles altogether. Yes, they look badass and provide better protection from the elements than soft tops. They also make your car harder for thieves to break into (no more holes cut into the roof). Still, they're heavy as hell and take up a ton of trunk space. It'll be interesting to see if BMW follows through and axes the folding hard top. Actually, what will be more interesting is if other automakers follow the leader and do the same thing. 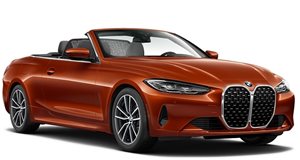