Looks like the hardcore Mercedes G-Class 4x4 Squared is making a comeback.

The Mercedes G-Class is one of the most capable off-roaders on the market, but that doesn't mean there isn't room for improvement. For the last-generation model, Mercedes offered a more hardcore 4x4 Squared variant with portal axles, a wider track, and massive 22-inch wheels giving the mighty G-Class more ground clearance. Rejoice off-roading fans, because it looks like the Mercedes G-Class 4x4 Squared is making a comeback.

Our spy photographers have spotted a prototype of a more extreme version of the current Mercedes G-Class undergoing testing with similar modifications to the old 4X4 Squared.

The regular G-Class G550 has been on sale since 2018, so the time seems right for Mercedes to introduce a more hardcore 4x4 Squared version to the lineup.

Spied undergoing extreme high-altitude testing in the Alps, the new G-Class 4x4 is easy to distinguish thanks to its extra wide wheel arches housing larger wheels with drilled brake discs. Side steps fitted to the SUV also provide easier access to the cabin. Elsewhere, a roof spoiler has been covered up to hide the SUV's LED light bars and a rear mounted spare wheel has also been fitted.

Like the previous model, the new G-Class 4x4 Squared will likely be powered by a 4.0-liter twin-turbo V8 engine producing 416 horsepower and 450 lb-ft of torque, but we suspect that AMG will launch a more powerful version.

Mercedes hasn't announced the new G-Class 4x4 Squared yet, but the new hardcore off-roader will hopefully break cover by the end of the year and go on sale for the 2021 model year. When it does, expect the extreme off-roader to cost considerably more than the regular G-Class G500, which starts at $130,900. For reference, the last-generation G-Class 4x4 Squared, which ended production in 2018 just before the new G-Class arrived, had a $227,300 price tag. Production will also likely be limited as the previous 4x4 Squared was capped to around 300 units. 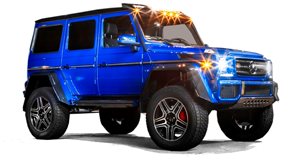