Here's What We Know About The Lamborghini Aventador Successor

Ten years. That's the production cycle of Lamborghini's V12 supercars. The Diablo and Murcielago followed this timetable and the Aventador, launched in 2011, will do the same. It's now late 2017 (the Aventador S Roadster just arrived) and that means Lamborghini is very much at work on a new V12 flagship. Automobile Magazine has recently learned a few details about what's in store for 2020. First off, this will be the first new Lamborghini launched under new CEO Stefano Domenicali, who replaced Stephan Winkelmann.

Point being is that Domenicali needs to prove himself in the post. The so far unnamed Lambo is codenamed LB634/635 (coupe/roadster) and it will be more evolutionary than revolutionary compared to the Aventador. Remember, the Aventador was a huge leap forward from the Murcielago, and was the first time Lamborghini built an entirely new V12 from scratch in decades. Therefore, the Aventador's V12 will live on, though upgraded. It'll supposedly be increased from 6.5- to 7.0-liters and can reportedly already make 800 hp on the dyno. Not surprisingly, Lamborghini briefly toyed with the idea of ditching the NA V12 for a 6.0-liter twin-turbo V12 with a supposed 900 hp (on paper).

That idea was scrapped in the end, and we're guessing it was partly because a V12 Lamborghini needed to remain NA. But why would Lamborghini settle for a less powerful NA V12? Good question, and here's the answer: while the V12 itself may have 800 ponies, the Aventador successor will also boast electric front-wheel-drive, which contributes an additional 160 hp or so. Do the math and there's a grand total of 1,000 hp and 885 lb-ft of torque. Lamborghini is also putting the car on a diet, thanks to an updated carbon fiber tub and other lightweight materials. It'll also feature a lower center of gravity, thus giving it a nearly balanced weight distribution. And finally, scissor doors will be standard. Wouldn't be a V12 Lamborghini if they weren't. 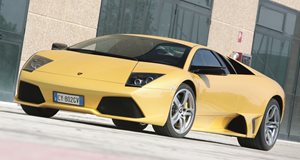