And the whole family will be able to enjoy it.

Just last month, Mercedes revealed the GLB (in concept form) at the 2019 Shanghai Auto Show. Although it was only a concept, it didn't have any of the usual concept elements - like gullwing doors, camera mirrors, or massive wheels - meaning this concept is very close to reaching production. Mercedes has already started gearing up production facilities in China and Mexico to build the GLB towards the end of 2019, the latter of which will take place in a facility shared with the Renault-Nissan-Mitsubishi Alliance. According to Mercedes-Benz Passion Blog, we now have a rough idea of when the production GLB will make its official debut.

The site claims the GLC will be revealed at the 2019 Frankfurt Motor Show in Germany, which is set to take place in September. September is pretty late in the year for a new car reveal, especially when that car is set to arrive in dealerships by year's end, but Mercedes has already confirmed that the GLB will hit showrooms before 2020. With any luck, the short reveal to showroom timetable is one Mercedes will deliver on. Since the US-spec GLB will be built in Mexico rather than China, it should arrive quickly at dealers as long as there are no setbacks. We expect US consumers to get their first look at the car when it makes a US debut later in the year at the 2019 Los Angeles Auto Show in November.

If the GLB ends up looking like the concept, then it should be an excellent competitor in the compact class. It will also be one of the smallest luxury vehicles you can buy with three rows, which could make it a compelling option for some buyers. We expect the GLB to debut with a 2.0-liter four-cylinder borrowed from the CLA, which produces 225 horsepower, but thankfully the AMG department is already cooking up a GLB35 with around 300 hp on tap for those wanting more performance out of the package. Pricing should be announced near the GLB's debut in Frankfurt along with the dates the GLB will become available in the US. 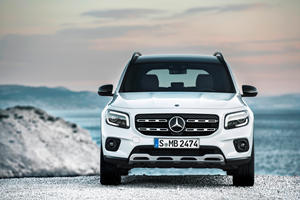