Here's Why The Volkswagen Arteon's US Launch Has Been Delayed

Earlier this month we reached out to Volkswagen to ask why the gorgeous new Arteon four-door coupe is not yet on sale in the US. A company spokesperson replied that the "Arteon is currently scheduled to arrive late Fall/early Winter. Our concern for the delay was justified because we feared VW may have changed its mind about bringing the Arteon to the US and instead keep it for Europe only."

Fortunately, today we have an official reason for that delay. Automotive News has learned that the Arteon's tardy US arrival is due to emissions certification. "This issue is because of delays in the certification process caused by a backlog in meeting WLTP worldwide emissions testing," claimed a company spokesperson.

VW also cancelled an Arteon media drive originally scheduled for next month. Now it all makes sense. At this point, VW says the Arteon will arrive in US dealerships no sooner than "early 2019." Depending on factors VW doesn't have much control over, it's possible the Arteon may not go on sale until spring, but it will definitely be coming to US dealers one way or another.

The Arteon will serve as a direct replacement for the now discontinued but highly regarded Passat CC. However, the US-spec Arteon will not be offered with a six-cylinder engine, but rather a 2.0-liter turbocharged and direct-injection TSI four-cylinder with 268 hp and 258 lb-ft of torque. Power will be directed to either the front or all four wheels through an eight-speed automatic transmission. No manual option is planned.

This engine-transmission combo will be for all trim levels, SE, SEL, and SEL Premium. Not surprisingly, pricing still has not been released, but we fully expect the Arteon will cost more than the Passat, but still less than some of its competitors, such as the BMW 4 Series Gran Coupe and Audi A5 Sportback.

The lack of a six-cylinder option, at least for now, does not allow the Arteon to properly compete with what we think would be a brilliant matchup against a certain Korean fastback: the Kia Stinger GT AWD. In any case, rest assured the Volkswagen Arteon will be coming to the US once that emissions bureaucracy is sorted. 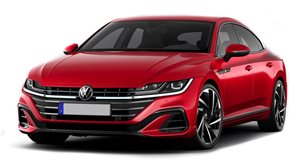 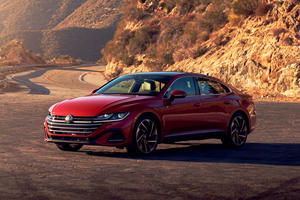