Here's Your First Look At The Audi RS5 Sportback Facelift

Expect the changes to be similar to the recently updated Audi A4.

Now that Audi has given the A4 sedan a facelift to fight the BMW 3 Series, the automaker is preparing to give the A5 range a similar raft of updates. And now we can present you with the first photos of the upcoming Audi A5 facelift, as an RS5 Sportback prototype was caught being tested on twisty mountain roads by our spy photographers. The front and rear fascias have been covered with camouflage, so it's not difficult to work out what will change in the update.

Like the 2020 Audi A4, expect the A5, S5, RS5 line-up to be updated with revised headlights featuring new LED graphics, a new front bumper with revised air intakes, and a new grille that's wider and positioned lower. At the back, there will also be new rear lights and minor changes to the rear bumper. The oval exhaust tips also confirm we're looking at the range-topping RS model.

Also expect some of the A4's interior changes to carry over to the facelifted A5, such as a new version of Audi's MMI infotainment system. While it doesn't have the dual-touchscreen setup found in newer models such as the A6 and A7, the A4's screen is increased to 10.1 inches and is touch-operated in contrast to the old model, which was operated by a central control knob on the center console.

It isn't clear if the updated Audi RS5 will get a power bump. In the current model, a twin-turbo 2.9-liter V6 produces 444 horsepower and 443 lb-ft of torque, which is sent to all four wheels through an eight-speed automatic transmission. This enables the sports sedan to do the 0-62 mph sprint in under four seconds and top out at 155 mph, or 174 mph with Audi's Dynamic Plus package.

Since the updated A4 has already been revealed, we're expecting the RS5 facelift to be unveiled before the end of the year. In fact, a leaked photo from an Audi presentation suggested a reveal was planned in Q2 this year, so it could break cover very soon. 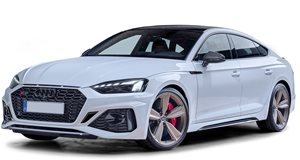 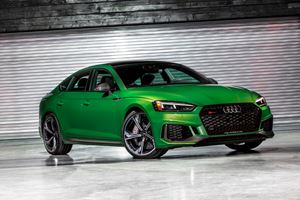