Here's The Original Mazda EV You Never Knew About

And it was originally set to be based on a Miata.

Mazda has just released the MX-30, the company's first production electric vehicle. The MX-30 is a crossover but Mazda gave it some unique styling elements to help it sound out, including RX-8-inspired counter-opening "freestyle" rear doors. Mazda has only announced the MX-30's battery size of 35.5-kWh, so we'll have to wait a bit longer to hear more information about range and output.

The MX-30 is a hugely important car for the brand but it wasn't the first EV Mazda ever built. That honor goes to a purple prototype built 25 years ago by Mazda Research Europe. We had no idea this car ever existed and it has an interesting backstory.

Back in the 1990s, Germany had an environment minister by the name of Dr. Angela Merkel - the current German chancellor. Merkel, along with French and Italian governments, began conversations with automakers to build what they called LEMs (Light Electric Mobile) in an effort to have 10% of cars be electric by 2000.

Christian Schultze, Director of Technology Research at Mazda Motor Europe R&D, who was a young engineer at the time, contacted students at the University of Darmstadt to help build an EV prototype. The students had already created a solar cell-powered race car but wanted to build a vehicle with more production viability. Schultze originally wanted to build an all-electric MX-5 Miata but the higher-ups at Mazda deemed that car should not become an EV. Instead, Schultze was given a red Mazda Carol, a small K-car sold in Japan, along with a 20,000 D-mark to build an electric prototype.

The goal was to create a usable city car with four seats, so the batteries needed to fit under the seats and engine bay. It wasn't fast by any means, with just 36 horsepower and a top speed of around 62 mph, but the car was usable and ended up winning prizes and races including the Rally Monte Carlo for EVs.

The students who worked on the Carol EV went on to write their thesis papers on the subject and now work in the industry for companies such as Lamborghini, Opel, Daimler, and Smart, where one of them helped to develop the first Smart EV. With the MX-30 now set to be introduced as the company's first production EV, it's fascinating to see the direction Mazda could have taken with electric cars more than 25 years ago. 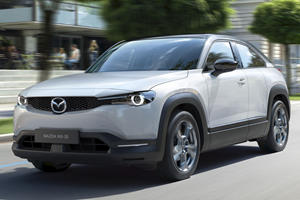