Here's Your First Look At The Brand New BMW 5 Series

The new 5 Series will spawn an electric i5 variant that will take on the Tesla Model S and Mercedes EQE.

BMW is busy updating its core model lineup. Later today, the all-new 2 Series will make its world debut. BMW has also been caught testing the upcoming 3 Series facelift and the next-generation 7 Series, so it was only a matter of time before we got a glimpse of the all-new 5 Series. That time is now because our spies have spotted camouflaged prototypes of the all-new 5 Series for the first time parked up at BMW's test facility.

Like the new 7 Series, the next-generation 5 Series will be available in combustion, hybrid, and electric flavors. As indicated by the "hybrid test vehicle" and "electric test vehicle" stickers, these prototypes are based on the plug-in-hybrid and fully electric variants of the new 5 Series. Presumably, the EV version will be badged as the i5.

At this early stage of development, the prototypes are fully camouflaged, making it difficult to get a clear look at the design details. Mercifully, however, it doesn't look like the new 5 Series or i5 will be getting the controversial vertical grille from the new 4 Series, i4, M4, and M3. Like the new 7 Series, the 5 Series prototype appears to have a distinctive shark nose, which makes the front look more aggressive than the current model.

Whereas the Mercedes EQE has slick coupe-style proportions, the i5 appears to take the form of a traditional sedan. The charger port is also clearly visible on the left front fender of the 5 Series hybrid.

The interior is completely covered up, but the new 5 Series and i5 could adopt the same curved display layout as the i4 incorporating a 12.3-inch digital display and a 14.9-inch infotainment screen.

As for the technical specifications, the i5 could use the same setup as the i4, which utilizes two electric motors producing a combined 536 hp in the high-performance M50 variant. The rear-wheel-drive eDrive40, on the other hand, features a single electric motor producing 335 horsepower. Powered by an 81.5-kWh battery pack, the most efficient i4 has an EPA-estimated range of 300 miles, but the larger i5 will likely have a slightly lower range. 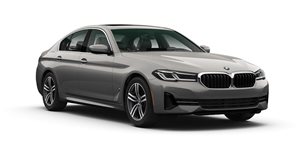