The Civic hatchback is headed back to America!

There hasn't been a Honda Civic hatchback in the US since 2005. That's all about to change with the 10th-generation Civic, though, as a five-door hatch is headed stateside. Honda's plan is to do what it did with the new coupe: show it in "concept" form first and then roll out the production model afterwards. Said concept is slated to debut at the 2016 Geneva Motor Show. Honda announced as much today, releasing a rendering of the new hatchback in the process. Unfortunately there's not much we can discern from this lone image.

There's a sporty dual exhaust mounted smack in the center. There are also some beefy air vents on both sides of the bumper. The taillight design is unchanged, a fact which we find awesome. No other details were released, which means we'll just have to speculate away. From the concept coupe to the production version a bit changed, noticeably in the aggressive exterior department. The side skirts and bumpers were brought in and the rear lost its USB port-esque exhaust. We're excited to see what the new hatchback will look like and to have it, as well as the Civic Type R, headed to the US.

First Look
2017 Honda Civic First Look Review: 10th Generation Could Be The Best Ever
Honda is making up for three years of terrible Civics. 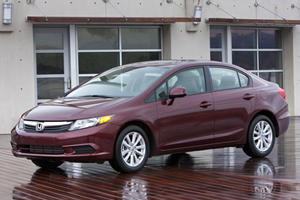