The production version will retain the concept's cute styling, but there are some significant changes.

At last year's 2017 Frankfurt Auto Show, we became besotted with the Honda Urban EV Concept, a pint-sized city car with adorable retro styling mixed with a modern electric powertrain. Soon after, Honda confirmed the Urban EV will enter production and go on sale in 2019. Fast forward over a year later and a prototype has been spotted on public roads, giving us our first look at the Honda Urban EV in production guise. It's covered in camouflage, but it's clear that the production model will be heavily inspired by the concept.

That said, there is one major difference: Honda has added some rear doors, turning the Urban EV into a practical five-door city car. Both the front and rear doors have frameless windows and integrated door handles, but the concept's suicide doors haven't carried over. While the concept had four seats, the more practical production version will likely have room for up to five.

Elsewhere, the front LED headlights appear to be lifted straight from the concept, but the rear lights look rounder than the concept's square ones. Interestingly, the prototype has also retained the concept's rearview cameras, and our spy photographers also noticed the inside rear view mirror was a screen instead of a mirror. Unfortunately, we don't get a good look inside the cabin, but we can still see that the concept's huge screen will be included in the production model.

As for technical details, nothing has been confirmed, but the production Honda Urban EV is expected to deliver a range of 155-217 miles. Production will start in the second half of Europe with deliveries starting in late 2019, so there's a good chance the Honda Urban EV will debut at next year's 2019 Geneva Motor Show in March. There's still no word yet if the Urban EV will be available in the US though, sadly. 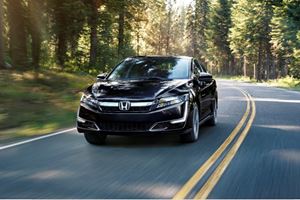