A forgotten model could be coming back.

Remember the Honda CR-Z? Yeah, that quirky hybrid hatchback sold from 2010 to 2016, which was a failed spiritual successor to the original CR-X. According to a recent application with the United States Patent and Trademark Office filed on July 29, 2020, the CR-Z could make a comeback. Honda recently announced a slew of changes to its 2021 lineup, including the discontinuation of the Civic Coupe and Fit Hatchback.

If brought back in the same capacity as before, the CR-Z could be an exciting and affordable replacement to the Fit for an American audience that does not receive the Japanese and European market model. But if we had to guess the CR-Z may be completely unlike what it was previously.

Honda eventually discontinued the CR-Z in 2016 due to slow sales. Even four years ago, the writing was on the wall for small coupes and hatchbacks as crossover sales soared. Honda would be smart to completely reinvent the CR-Z as a coupe-like hybrid crossover based on either the HR-V or CR-V with styling elements from the Honda Insight hybrid. Such a creation would target the new Toyota Venza, which is essentially a more luxurious and stylish version of the popular RAV4.

Admittedly, we have no idea why Honda applied to trademark the CR-Z name. It could be for an upcoming product launch, but it could also be to keep it away from other automakers. We'd love to see the CR-Z return as a hybridized or electric hot hatchback, much like the Honda e that is unavailable in the US. A sportier Si or Type R model would be even cooler, though this is likely wishful thinking. We anticipate Honda will keep any news related to the CR-Z close to the chest, and only announce updates when the time is right. 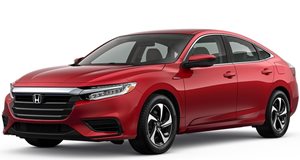