Hyundai Is Serious About Building A Flying Car

We checked... it's not April Fools' day.

Hyundai recently allowed us to get behind the wheel of its racing prototype, the RM19. The RM19 is a racecar with a massive rear wing but Hyundai claims it has plans to put the car into production. As it turns out, this may not be the only upcoming Hyundai vehicle to include massive wings. Hyundai recently revealed its "Strategy 2025," roadmap, which outlines the company's business plan for the next five years.

One piece of the plan includes the creation of something called a "Personal Aerial Vehicle," or "PAV" for short. Hyundai didn't share any details about what this PAV might look like but in a recent announcement outlining the company's 2020 Consumer Electronics Show plans, we got our first glimpse of the flying car.

The PAV will be developed by Hyundai's Urban Air Mobility (UAM) division, which specifically deals with passenger air transport. Although it will almost certainly arrive in concept form, the PAV is set to make its debut next month at CES in Las Vegas. Hyundai describes the PAV (as pictured in the above teaser) as "a cross between a helicopter and a flying car." The use of airspace should, in theory, reduce congestion on the road and "provide travelers with a better quality of life."

As skeptics of the whole flying car craze, we have serious doubts about the viability of Hyundai's PAV. For starters, airplanes and helicopters require extensive checks before takeoff, which most vehicle owners would not be qualified to perform. Then there's the element of safety. A below-average driver can barely handle a car on the road without crashing, so we can't imagine handing them the keys to a flying vehicle. To say we question the overall viability of a production flying car in the near future is an understatement. Hyundai has wowed us with advanced vehicles like the Nexo in the past, but a flying car might be a step too far.

Along with the PAV, Hyundai's CES reveals will also include a Purpose Built Vehicle (PBV) with autonomous driving technology and a mobility solution called the "Hub." Pictured in the rendering, the Hub is an area where PAVs will take off or land and PBVs will arrive and depart. Hyundai also describes the Hub as a "meeting place in cities for various common activities." All of these concepts will be on display at CES on January 6, 2020. 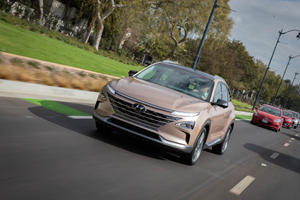