Hyundai is no stranger to taking some big chances and unlike other automakers, those risks have typically paid off. For example, Hyundai invested heavily in design beginning about a decade ago and has since become an industry design powerhouse. The results speak for themselves.

The South Korean automaker is also heavily involved in motorsport and performance in general. A few years ago it successfully hired away Dr. Albert Biermann, who previously served as head of BMW's M division for years. He's now head of R&D at Hyundai. But there's still another frontier Hyundai wants to conquer, off-roading. There are many benchmarks in this segment but Hyundai appears to be targeting the one and only Toyota Land Cruiser.

Speaking to Australia's CarsGuide, the automaker's general manager of product for that market, Andrew Tuitahi, made quite clear there's a market for a Land Cruiser rival, at least Down Under.

"We study everything that is a potential global project. There is a market here. But there are significant challenges with bringing a car like that to market," he says. "[Like a] Land Cruiser brand name. We have the ability to overcome a lot of those challenges. I don't think that would be a problem if we were to bring a rugged SUV to market."

Whether such a potential SUV would ever arrive in the US if the project receives a green light remains uncertain, but, then again, the Land Cruiser's future in our part of the world is also far from certain.

In Australia and elsewhere, the Land Cruiser 300 Series is expected to debut in about a year's time and it'll ride on a new ladder-frame TNGA platform. Both gasoline and diesel engines will be on offer, but a V8 is unlikely. But don't think for a moment Toyota intends to allow Hyundai to eat its lunch. Toyota has decades of proven off-roading experience and it aims to protect its turf.

This isn't the first time we've heard a rumor regarding a serious off-road-capable Hyundai SUV and it definitely won't be the last. The automaker also has many great engines to choose from for such a vehicle, including the overseas-only 3.0-liter six-cylinder turbo diesel that's good for 274 horsepower and 434 lb-ft of torque.

Design
The GMC Hummer EV Almost Looked Like This 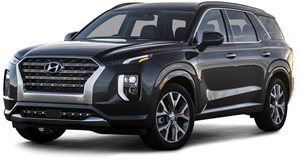