Hyundai's Ioniq 6 EV Won't Look As Sleek As We Thought

New spy shots show it won't look as good as the concept.

When we learned that the Prophecy concept shown by Hyundai would be making it to production, we were excited by the possibility of such a futuristic and stylish vehicle coming to our roads. We've since been told that the production car will be called the Ioniq 6, and as expected, the spy shots we've seen of this car so far show that the radical design has been toned down considerably. The interior will still be a stunning place to sit, but the exterior has been hidden from us pretty well so far. Things at Hyundai must be progressing though, as bits of camo are slowly disappearing from the Ioniq 6, revealing more and more of the car's design.

The above video shows that the digital camouflage wrap has been removed, with only the canvas concealers remaining over the body. We still can't see very much, but the overall shape of the car is coming into focus more clearly - even if the photographer who took these shots has trouble focusing. From these images, we can see that the suicide doors of the concept are certainly not making their way to production and that both the front and rear overhangs have increased in size, presumably because a production car needs more space for things like battery packs and trunk space. These changes likely mean it won't have the same svelte curves as the concept.

Other details we've gleaned from previous spy shots include the fact that the Ioniq 6 will feature flush door handles and possibly the retention of the concept's trunk-mounted rear wing, which may or may not house a third brake light. As for performance, we expect two power plants to be on offer with both single- and dual-motor variants to be offered, the latter of which is likely to produce over 300 horsepower.

We expect a full reveal sometime next year, but with the Ioniq 6 being caught with less and less camo as the months go by, we may be able to provide you with an accurate render before then. 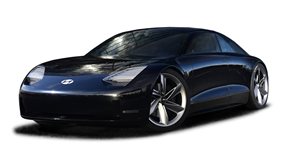