It has nothing in common with the new Kia Sedona.

The 2021 Kia Carnival, which will be sold as the 2022 Kia Sedona in the US, recently debuted with a more stylish exterior and a more spacious cabin than its predecessor. Now Kia's corporate cousin Hyundai is reportedly developing its own minivan. But it won't be a rebadged version of the new Sedona as you might have expected. Hyundai used to sell the Entourage as a rebadged Sedona in the US, but it hasn't been in production since 2009 as crossovers have proven more popular in America.

Instead, Hyundai's new minivan is reportedly called the Custo and will have nothing in common with the new Kia Carnival.

According to Car News China, it's being developed as part of a joint venture between Beijing Hyundai and BAIC Motor. There will be room for up to seven occupants, but the Custo will also be available as a six-seater.

Photos taken of a prototype show that the Hyundai Custo has a very peculiar design and ungainly proportions. The large front grille looks similar to other recent Hyundai models like the Santa Fe, but the headlight design is unlike any other Hyundai model. Black side skirts, large wheel arches, and black trim applied to the bottom of the doors give the Custo a more rugged appearance from the side profile, but the sharp design lines make the styling look too cluttered.

It also looks too long from the side profile, in contrast to the stubby front end. At the rear, the Custo features tinted taillights, an LED light bar, and a roof spoiler.

Inside, the interior shares some similarities with the 2020 Hyundai Sonata such as the same four-spoke steering wheel and gear selector buttons. There's also a fully digital instrument cluster and a large portrait screen for the infotainment system. Powering the Hyundai Custo will be a 2.0-liter turbocharged four-cylinder engine producing 237 hp and 260 lb-ft torque, paired with an eight-speed automatic transmission.

The Hyundai Custo will go on sale in China this October, but we aren't expecting it to come to the US since it has nothing in common with the new Kia Sedona. 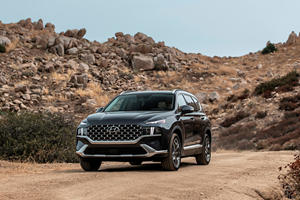