The Hyundai Kona EV continues to be a phenomenal success for the South Korean automaker. When it first hit the US market in early 2019, demand was far greater than supply. This past summer, Kona EV sales surpassed over 100,000 units worldwide, a major milestone for an all-electric vehicle. That figure continues to climb. The Kona EV also carries a starting price tag of $37,190, making it one of the most affordable battery-electric SUVs on the market. However, Hyundai has a decision to make about the model's long-term future.

According to Autocar, Hyundai may drop electric variants of current models which also offer a combustion-engined counterpart. The Kona is clearly on that list. What's the logic to this? The new Ioniq sub-brand that is fully dedicated to all-electric models.

Hyundai's global product boss, Lorenz Glaab, told the publication "That sort of direction is possible, but for the time being Kona EV will still be around and run in parallel [to Ioniq models]."

If you recall, Hyundai launched its new Ioniq EV brand in August and its first model will launch next year. A total of three new vehicles are planned dubbed Ioniq 5,6, and 7, respectively. The Ioniq 5, a production version of the Hyundai 45 concept, will arrive first. This move makes sense because it will be classified as a midsize crossover, one of the world's most popular vehicle segments at the moment.

The Kona EV, to compare, is classified as a subcompact crossover. Also for the foreseeable future, the Hyundai Ioniq Electric and Plug-In will press on, though it would make sense for them to be phased out once the lifecycle ends. Ioniq, as a brand, will pick up the slack from there. Before that, the Ioniq 6, a production version of the Prophecy concept, will debut in 2022 and the Ioniq 7 large SUV in 2024.

Given the Kona EV's continued success and the fact it's still relatively new, we don't think it'll be going anywhere just yet. But it's time will come soon enough and when it does, the Ioniq brand will fill the gap. 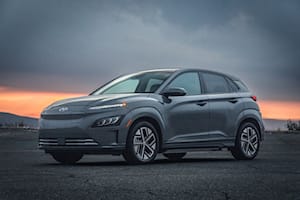