It's already been five years since Infiniti revealed the Emerg-E Concept.

Infiniti's current range is crying out for a halo performance model. Nissan's premium car division has been teasing about its desire to build a supercar for some time now, as shown by concepts like the hybrid Emerg-E concept shown at the 2012 Detroit Auto Show, but now we have a potential reveal date. Autocar reports that Infiniti will finally reveal its long-awaited new performance car in concept form at next year's Detroit Auto Show in January, before the production model launches in 2019.

Design boss Alfonsa Albaisa confirmed that it won't be based on an existing model, and will be an all-new electric car following the same path as its German rivals. Albaisa shared the news with Autocar at the Monterey car week, where the vintage racing-inspired Prototype 9 Concept was on display which uses an electric motor. Intriguingly, he revealed that next year's electric performance car concept will utilize some of the technology of the Prototype 9 "in a different context" when it' debuts in Detroit. Let's hope it looks as sleek as the Emerg-E sports car concept. The design boss has already driven a prototype model earlier this year, which he described as "very good."

It will also be based on a different platform than the Nissan Leaf, but details are still scarce. Albaisa hinted that the new Infiniti will priotize performance and handling to offer a "unique Infiniti driving experience" for its electric performance car. Based on the Lotus Evora, Infiniti's last electric car concept, the Emerg-E, was originally supposed to arrive in dealers in 2014. It's powered by two electric motors with a lithium-ion battery pack, four inverters and a three-cylinder gas engine, resulting in a combined output of 402 hp, a 0-62 mph time of four seconds and a 300-mile range running on its three-cylinder engine. Running on all-electric power, the battery lasts 30 miles. 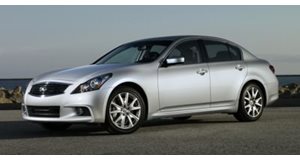