For the first time ever, the Elantra goes hybrid.

During a live broadcast from West Hollywood, California, Hyundai has just unveiled the 2021 Elantra, the seventh-generation of the Elantra nameplate. The all-new model features eye-catching styling, an impressive interior, advanced technology, an updated drivetrain, and for the first time ever, a hybrid variant. The 2021 Hyundai Elantra Hybrid arrives alongside its gasoline counterpart, looking to rival the Honda Insight and Toyota Corolla Hybrid.

The Honda and Toyota are both great cars, each capable of hitting up to 52 mpg combined according to the EPA. Hyundai hasn't released official fuel economy figures yet but it looks like the Elantra Hybrid should be very close to its main rivals.

Whereas the standard Elantra uses a 2.0-liter four-cylinder engine mated to an intelligent variable transmission, the hybrid is a bit different. It uses a smaller and more efficient 1.6-liter GDI Atkinson-cycle four-cylinder engine paired with a permanent-magnet electric motor that provides 32 kW. The electric motor is powered by a lithium-ion polymer battery with 1.32 kWh of capacity, yielding a total system output of 139 hp and 195 lb-ft of torque.

This is only a bit less power than the 147-hp output of the 2.0-liter engine but a lot more torque (132 lb-ft in the non-hybrid). All of that power is still sent to the front wheels but instead of using a continuously variable transmission, the Elantra Hybrid uses a six-speed dual-clutch to provide a more engaging driving experience. Theoretically, this should be an efficient hybrid that looks great and doesn't suck to drive.

Official EPA fuel economy figures and pricing have yet to be announced but Hyundai promises the combined rating will be over 50-mpg. That puts it right within spitting distance of the Insight and Corolla Hybrid. Hyundai says the Elantra Hybrid will be capable of driving on electric power alone but like most non-plug-in hybrids, we assume this feature will only work at low speeds for short distances. Unlike the Corolla Hybrid, which is only available on one stripped out trim level, we expect Hyundai to offer the Elantra Hybrid with the same incredible technology as the standard car when it arrives later this year. 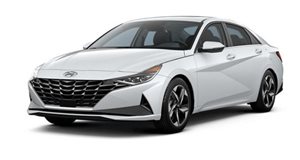 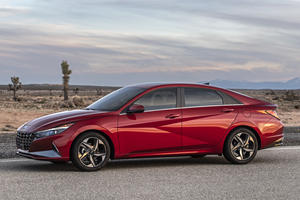