Is The Lexus GS-F A Match For The Cadillac CTS-V?

We were very excited when Lexus said that it would do an F version of the GS. The GS is Lexus' mid-size sedan that competes against the BMW 5 Series, Mercedes E-Class, and Audi A6, and we thought that an F-powered GS would be an excellent alternative to the ridiculously fast M5, E63 AMG, and RS7. However, when the GS-F was revealed, we found out that it "only" had 467 horsepower from a 5.0-liter V8. That is the same amount of power as the RC-F that competes with the M3/4, C63 AMG, and RS5 which are much less powerful that their big brothers.

The GS-F does have a huge advantage over the much more powerful German cars, though. Its price. The GS-F costs $84,000, which undercuts the cheapest car, the M5, by $10,000. However, the GS-F does have one competitor in its price bracket: the 640-hp Cadillac CTS-V. But can the F match the V? 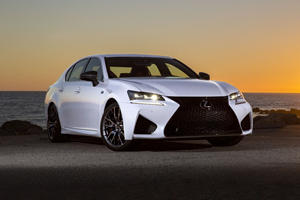