Is Volvo Planning A Cheaper XC40 Recharge For The US?

A front-wheel drive SUV is going on sale in the UK soon.

Volvo sales are going gangbusters in 2021. Like many automakers this year, the Swedish company is reaping the benefits of pent up demand during the Covid pandemic. We're not sure how long these record-breaking numbers will continue, considering the semiconductor shortage, but for now, Volvo's SUVs and EVs seem to be doing well.

That makes this the perfect time to introduce a new model, especially if its cheaper. Volvo in Sweden already sells a one-motor XC40 Recharge EV. As opposed to our two-motor version, it gets about the half the power, and also has a lower price. According to Cars UK that new car is now on its way to the UK too, but we still don't know if it will come to the US.

We asked Volvo if it thought that Americans might have an appetite for a single-motor XC40 Recharge and if there was anything preventing Volvo from bringing that version of the vehicle here. We were hit with the usual "nothing has been announced for the US and we can't comment on future product," but the Volvo spokesperson didn't say there was anything preventing them from doing that, so we'll assume it will.

Our current XC40 Recharge only comes with two motors and all-wheel drive. Output is rated at 408 hp and with the standard 75-kWh battery pack it can go about 208 miles on a single charge. Volvo says its battery can charge 80% in 40 minutes on a fast charger. It starts at $53,990 before destination and handling.

A single-motor XC40 would come in cheaper than that price. We'd guess it could start around $40,000. Output for the one-motor Swedish version is rated at 231 hp, so it would probably stick close to that. That new version also only loses 6 kWh in the battery pack, so range would probably stay near 200 miles.

Of the new version, Volvo's Henrik Green said, "By adding a single-engine XC40 Recharge, we broaden the appeal of our all-electric range. Customers can now choose between two distinct variants of the XC40 Recharge and the recently launched Volvo C40 Recharge." 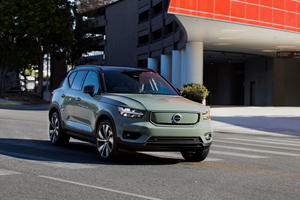