When you think of Italy and motorsport, there are a few names that probably spring readily to mind. Ferrari, Alfa Romeo, and Maserati are the big ones, the former two both having an active involvement in Formula 1 racing, and the latter is returning to sports car racing with the new Maserati MC20. True racing fans and car history buffs are probably also familiar with Lancia and Abarth.

But there's at least one name from Italian motorsport history we'd guess you probably haven't heard of: Taraschi. From 1947 to 1964, Berardo Taraschi crafted purpose-built Italian race cars from whatever parts he could find, managing a Sport 750-class win at the 1948 Targa Florio in a car cobbled together from a Fiat Topolino chassis and a BMW R75 motorcycle engine, and seeing some success in the open-wheel Formula Junior series from 1958.

Now, after all these decades, the Taraschi name is making a comeback, with a new sports car that will mark its global debut at the Automobile Museum of Turin on October 7. It's called the "Taraschi Berardo" after the founder of the historic race car constructor, although this time, it's Berardo's son Tazio who is at the helm.

Nothing is known about the car at this point; Taraschi shared just a single dark teaser image ahead of the reveal, the car's curvy, athletic shape all but obscured by shadow. All that can really be gleaned from the image is a gaping hood scoop, some big, rounded front fenders, some teardrop-shaped headlights with slender daytime running lamps, and what appears to be a broad front splitter.

Also shared were a few photos of past Taraschi race cars, which showcase some of the new sports car's design influences.

The photo appears to point to a road-legal, front-engine coupe with a sleek, svelte design, but beyond that, there's not much more to be inferred. Unfortunately, we're not even certain whether the Taraschi Berardo will be offered on this side of the pond. It seems like a longshot, given how difficult and expensive it is to federalize a car for sale in the US market, and while you might hope the Low Volume Motor Vehicle Manufacturers Act of 2015 would provide an easier pathway to domestic sales, that law applies only to replica cars, based on production vehicles at least 25 years of age.

Oh, well. At least it ought to be pretty to look at.

Taraschi's revival is just the latest in a stream of reborn classic car marques that includes Alpine, De Tomaso, and Delage. 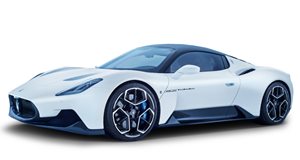