Jaguar Could Build SUVs Smaller Than E-Pace, But Is That Going Too Far?

When Tesla CEO Elon Musk stands up and makes a bold claim about taking his brand downstream in order to sell to a wider audience, no one really bats an eye. Part of that has to do with the fact that Musk makes seemingly outlandish claims all day and sooner or later they come true, but it's also due to the newness of the Tesla brand, which affords it the flexibility to experiment with new cars, different audiences, and new price points. On the other hand Jaguar is best known for gorgeous exotic coupes.

More recently it's been churning out SUVs that look equally as good, but the brand is established as a luxury automaker for much longer than Tesla has even been a car company, so pitching its wares to customers at the bottom of the income bracket should turn some heads in the industry. It was one of the first things that went through our minds when the new E-Pace SUV dropped. A starting price of $38,000 means it's not exactly cheap, but with the average sale price of a new car in America coming in just shy of $35,000, it's within reach of many buyers. Buyers happen to want SUVs en masse at the moment, meaning there's potential for Jaguar to make even more money with smaller SUVs.

At least that's what Jaguar's famed Jaguar design director Ian Callum said during an interview with Autocar. When asked if a car smaller than the E-Pace is possible, Callum said, "No plans, but I'd like to think so." The limiting factor, he adds, is not lack of will, sales potential, or nannying bean counters. Instead it has to do with the fact that the E-Pace is built on an SUV platform, which cannot have its wheelbase shrunk any smaller than it already is. Jaguar already mounted the E-Pace's 2.0-liter turbocharged Ingenium engine transversally to spare whatever room it could. It is still possible to build smaller if Jaguar goes front-wheel drive, but the message to takeaway is that Callum doesn't feel limited to one size.

"There's lots of choice, with lots of architectures with massive boundaries," said Callum. "We're able to pick the right one. Perhaps it's old behavior to create products to suit architectures; now there's no need to." Seems that anyone who's been feeling good about what Jaguar has been churning out lately will want to stay tuned. 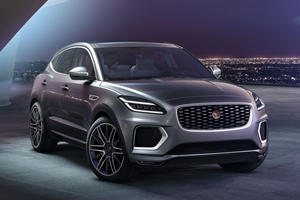