Jaguar XF Gets Some Extra Wheels

How many bicycles can you fit on top of a Jaguar XF? Nine, as it turns out.

Bradley Wiggins emerged as the winner of this year's Tour de France, but he didn't do it alone. Supporting the British cyclist was a whole team of specialist - in a Jag. The specially-equipped XF Sportbrake was presented to Team Sky by Jaguar before the Tour, when it wore the team's sky-blue color. Once Wiggins earned the yellow jersey worn by the race leader, the car switched to a yellow livery as well. The Jaguar was equipped with radios, TVs and a custom roof rack capable of holding nine bicycles.

Wiggins and Team Sky went on to win the race. Whether having the luxury station wagon at their disposal helped or not is open to debate, but they certainly looked stylish in the process. And that is no mean feat when you're huffing and puffing on two wheels all over the French countryside. 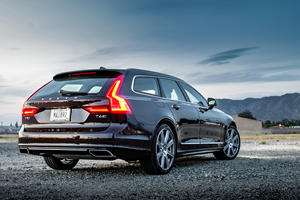