James Bond Gets a V12 Vantage

Actor Daniel Craig is the new owner of an Aston Martin Vanquish V12 Roadster - a proper ride for Bond himself.

How does the guy who currently plays British secret agent James Bond celebrate his birthday? By getting an Aston Martin, of course. For actor Daniel Craig, his 45th birthday meant it was time for something special. In addition to the latest Bond film, "Skyfall", being the huge hit it is, it seems that Craig simply fell under the Aston Martin spell. And really, who could blame him? As this picture first shown in The Daily Mail reveals, the actor has just reportedly taken delivery of a new red V12 Vanquish Roadster.

Yeah, yeah, it doesn't have any of those Bond-only toys such as machine guns and rocket launchers but we're sure the 6.0-liter V12 with 510 horsepower and 420 lb-ft of torque will more than suffice. It appears that playing Bond does sort of rub off on you after a few films.

Best Trucks You Can't Buy In The US
Source Credits: www.dailymail.co.uk 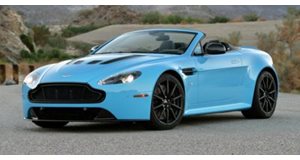