"This is the car that really put Cadillac on the map."

Once a top-end luxury marque, Cadillac's fall from grace has seen it slip into the premium category in the last few decades. That's all set to change with the introduction of the Celestiq, an all-electric luxury sedan that will take the fight to Rolls-Royce and Bentley. Many are doubtful as to whether Cadillac can pull it off but, remember, this is a brand that was once referred to as "the standard of the world."

Of course, that old adage was true when the company was making vehicles such as the 1930 Cadillac V-16. "This was for the banker, the prestigious Wall Street guy, that type of person," explains Jay Leno. "This is the car that really put Cadillac on the map." That comes as no surprise, frankly. While rival companies were offering eight- and twelve-cylinder engines, America's premier brand shocked the world when it introduced the gargantuan 7.4-liter V16.

Despite being introduced at the beginning of the Great Depression, the V-16 served as an aspiration car. "I guess this would be the equivalent today of a Bugatti Chiron, adds Leno." Fitting, really, seeing as the modern-day hypercar also boasts sixteen cylinders - and costs a fortune, too.

Back in 1930, the Cadillac V-16 was priced at $6,500. That doesn't sound like much today but, remember, a Ford Model T would cost around $240 in the same period. This specific V-16 is the prized possession of the Nethercutt collection, with Vice President Cameron Richards noting this yellow and black-painted example is particularly special.

The bodywork seen here is actually from a 1928/1929 model. But as Richards explains, there's a good reason for that. "It's a '28 or '29 body put on a 1930 chassis. A guy named Gilbert Meyer had [some] pull at GM back in the day. He heard about the V-16 that was coming out and he wanted it right away." This makes this a rather unique variant of an already special vehicle.

Lifting the hood, the former talk show host is amazed at the sheer beauty of the massive powerplant. "Look at this engine compartment," exclaims Leno. "It's beautiful." Despite the immense size of the engine, the V-16 was never designed to be a performance vehicle. Whereas an equivalent Cord was packing 265 horsepower under the hood, the Cadillac had a more modest 180 horsepower on tap.

The Cadillac was designed to be a comfortable luxury car, not a sporting machine. As Leno steers the decadent classic out of the garage, he is amazed at the effortless torque and ease with which the three-speed manual transmission operates. "Boy, this does drive nice," he adds. On the open road, the V-16 gallops along with ease, a delicate engine thrum the only hint it's in operation.

Despite its advanced age, the Cadillac demonstrates that it's still able to do what it's designed to do - cruise effortlessly. "It just pulls right away and the suspension floats so nicely," says Richards. Nethercutt's VP says the V-16's ride is, in fact, more polished than many modern-day luxury cars.

It's incredible to think that Cadillac, once revered as the world's finest automaker, has become the producer of mainstream vehicles. Hopefully, the Celestiq will change all of that, and blot out the bad memories caused by nightmares such as the Cimarron and other malaise-era vehicles.

"If you ever get a chance to drive a Cadillac V-16, please [do]. It really is a fascinating experience, it's amazing how advanced it is over other cars of the period," adds Leno. 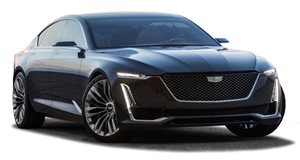