Fans will have to wait a while longer to see the production SUV.

Aside from the Ford Bronco and the Ram 1500 TRX, the next most exciting reveal of 2020 has to be the Jeep Grand Wagoneer. It's been a long time coming though, with rumors circling the auto scene from before 2014. Now, nearly seven years later, we're finally on the verge of seeing a new Grand Wagoneer. After several teasers over the last few weeks, Jeep confirmed we'd see the new Wagoneer on September 3. But for those who were getting excited over the prospect of a new three-row SUV, you'll have to wait a little longer. This is because next week's reveal will be of a concept version of the Grand Wagoneer and not the production version.

This makes us seriously question Jeep's tactics, as the Grand Wagoneer, alongside the standard, short-wheelbase Wagoneer are set to go into production next year, with a release date in the second quarter of 2021. Jeep has also announced that it will reveal its Wrangler 4xe plug-in hybrid at the same event, with several teasers for the Wrangler also being released lately. Jeep has kept the specifications for the eco-friendly Wrangler a tight kept secret, but we know it will go on sale in December. At least we know a good few things about the production version of the Wagoneer range.

The return of a vehicle that defined a generation of adventure. Coming 2021. pic.twitter.com/9dEOBlC5YN

Then Grand Wagoneer will share its underpinnings with the Ram 1500. This stretched out SUV will make use of independent rear suspension as well as the Ram's eTorque 3.6-liter V6 and 5.7-liter V8 engine options. Other engine options will include the 6.4-liter HEMI V8 from Ram's heavy-duty models, and power will be transferred through a ZF-sourced eight-speed automatic transmission. A hybrid version has also been mentioned as far back as 2016, and will most likely be a 48-volt system that goes with the Ram's range of engine options. All-wheel-drive will be standard across the range. All we ask is that Jeep cut the teaser videos and show us the real thing already. 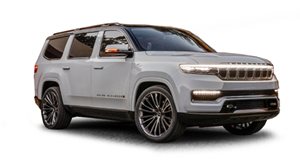