The fastest car with a small turbo engine is a Volkswagen Jetta Hybrid modified to produce 300 horsepower at Bonneville.

The Volkswagen Group makes plenty of cars that can go fast, but the Jetta isn't one you'd expect to see at the top of the list. Especially not the Jetta Hybrid. But that's precisely what VW is touting for its top-speed prowess. A modified VW Jetta Hybrid recently set a new land speed record for cars with forced-induction engines displacing less than 1.5 liters at the Bonneville Salt Flats. It hit a top speed of 187.147 mph (just over the 300 km/h mark) and averaged 186.313 mph to claim the record.

The record was set by Motor Trend editor Carlos Lago in a car specially prepared by Volkswagen R&D with a lowered suspension, special wheels and tires, a stripped-out interior and all the requisite safety equipment. But while the 1.4-liter turbocharged direct-injection four and electric assist in the stock Jetta Hybrid produces 170 horsepower, the Land Speed Record project car was modified to churn out approximately 300 horsepower. The modifications made the Jetta not only the fastest production-based, small-displacement turbocharged car in the world, but also the fastest hybrid. That is, at least, until sister-company Porsche tries out its new 918 Spyder on the salt.

All The Amazing Supercars Coming In 2022
Now Buzzing 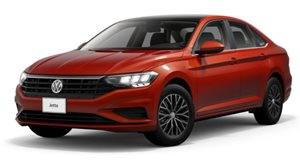