And it would cost way less than Tesla's FSD.

It's hard to imagine how we'd make the 2022 Kia EV6 any better, besides waiting for the high-performance EV6 GT with 577 horsepower. Despite this, Kia is already working on how to improve its popular electric vehicle by adding requested features in a facelifted model. The Korean Car Blog obtained a survey sent out by Kia, asking customers various questions about what they'd like to see in an updated EV6.

Kia did not publicly admit what it asked in the survey, but does not deny sending one out. "Like all automakers, Kia America continuously studies the marketplace to identify and gauge consumer interest and trends," a Kia spokesperson told CarBuzz.

The survey reportedly mentions a "full self driving option" priced at $7,500, asking current EV6 owners if that amount sounds reasonable. This could be Kia's attempt to see if its customers are as interested in semi-autonomous driving features as Tesla owners. For reference, Tesla currently charges $12,000 for its Full Self-Driving Capability and recently started offering a cheaper Enhanced Autopilot feature for $6,000.

It's unclear when Kia would roll out such a feature and what its capabilities would be. Kia's Highway Driving Assist II currently combines adaptive cruise control and lane-keep assist on the highway, but does not allow drivers to take their hands off the steering wheel like GM's Super Cruise of Ford's BlueCruise.

Kia also asked EV6 owners if they'd be interested in a black limited edition model with gold wheels. The image of the car (pictured below) looks pretty sleek, and we'd answer 'yes' if given the survey. Despite the survey leaking on the internet, Kia denies it is working on such a special edition.

"We do not comment on potential future product offerings and should a media outlet suggest something other than what Kia America has previously publicly and officially announced would be pure speculation," the spokesperson said.

Perhaps less interesting, but Kia wrapped up the survey by asking EV6 Wind owners if they'd pay extra for a sunroof, which is not currently available. Kia also asked polled customers to choose between the Wind and GT-Line trims, if they could only pick one. This could hint that the EV6 lineup may shrink with the upcoming facelift. 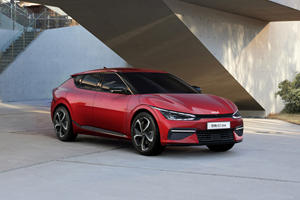