Better still, it will spawn a version for the "leisure" sector.

Little more than a decade ago, Kia took a stab at introducing a true body-on-frame SUV in the North American market: the Kia Borrego. It was, by all accounts, an excellent vehicle, but if you've never heard of it, it's because it sold quite poorly - so poorly, in fact, that Kia pulled the plug on the Borrego in North America after just two years on the market. The closest thing we ever got to a replacement is the Kia Sorento.

But the Kia Borrego - sold as the "Mohave" in most markets - is still alive and well on the global stage, and in fact, the SUV is about to lend its platform to an unlikely product: a new light military truck.

Kia is no stranger to manufacturing military vehicles; two years ago, the South Korean automaker introduced the Kia Light Tactical Vehicle (pictured), which looks thoroughly Humvee-esque. The new Mohave-based military truck represents the next step in Kia's evolving military vehicle story, with a prototype due sometime next year. It will take the form of an open-air all-terrain vehicle, and apart from being deployed in service of the military, it will also spawn versions for the industrial and leisure sectors.

More than likely, the new military ATV will draw upon the Mohave's factory 3.0L diesel for power, but Kia has also announced that it's looking into the possibility of using hydrogen fuel cell tech for military applications - not just for vehicle propulsion, but for emergency power generation as well.

This is all fine and good, but the part we're most intrigued by is the bit about Kia's new all-terrain vehicle spawning a version for the leisure sector. That suggests that it could follow a path plotted by the original Willys Jeep and, decades later, the Hummer H1. With utility vehicle popularity at an all-time high, it's not inconceivable that it could even make its way to the US, where it might pose stiff competition to the likes of the Jeep Wrangler and Ford Bronco.

Maybe this is all wishful thinking on our part, but we think the leisure version of the forthcoming Kia military ATV would find an eager customer base here in the US. It might be more than wishful, though, as the rumors had already been spreading a Toyota Land Cruiser rival was incoming. 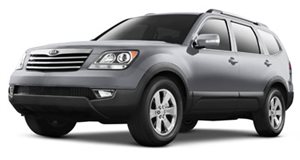