First we miss out on the wagon and now this?

Considering the United States is one of the biggest markets for the Kia Optima, it's surprising to know that we don't get all the versions of this rather handsome sedan. We've already been denied access to the Sportswagon for the time being, and the racier "GT-line" trim that's coming to most European territories also won't be offered by US dealerships. Now, though, Autocar is reporting that another Kia Optima model is set to have its plug pulled, albeit this time on a global scale. Which Optima is getting the axe? The suspense is almost too much to bear!

According to Autocar, Kia is heavily leaning towards cancelling the diesel-electric hybrid powertrain it's been developing that, if completed, would have been installed in the Optima range at some point. In an interview with Albert Biermann it was indicated that, whilst the research is still ongoing, it's becoming increasingly difficult to justify the development expenditure. It also appears a lot of this cost involves the diesel engine such a system will be paired to. As a rule of thumb diesel engines are more expensive to develop and assemble than comparable gasoline engines. It's highly likely, then, that the sheer investment needed to engineer a diesel-electric hybrid powertrain will result in the project being scrapped in the near future.

That said, it won't mean all the R&D effort will have gone to waste, as the lessons learned during the development of this setup will almost certainly be applied to other models and projects. Better still, Biermann also indicated the the electric part of this particular hybrid system could be converted to use with a gasoline engine, saying such an outcome would be a "good choice." So, whilst the diesel-electric Optima may be dead in the water, we're now one step closer to getting a better version of the already rather well-rounded Optima Hybrid we already have access to. Glass half full, right? 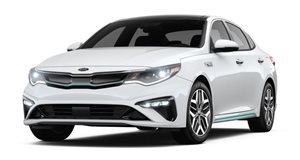