There is surprisingly little data available on the subject of whether customers would be more or less likely to buy a car if it were named after a version of the Bible. But that didn't stop Kia from announcing an upcoming version of the K900 sedan called the King James Edition, named in honor of LeBron James but still definitely also the Bible. All we know so far comes from the teaser on the next page, and it seems that there will be a special red and black color scheme.

This is no doubt a play to attract more attention to the K900, which Kia has been having an incredibly difficult time selling. Of course, this is likely because of the absurd price tag, which is well into the BMW 5-Series range, and a special edition isn't going to change that. We're just looking forward to seeing how it stacks up to the Michael Jordan Edition Chevy Blazers from the Nineties. Remember those? No? Well, nobody is going to remember these in 20 years either.

First Drive
7
2019 Kia K900 First Drive Review: Proof Kia Can Mix It With The Big Boys
Think of it as a bargain BMW 7 Series. 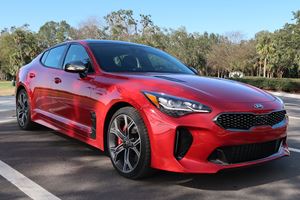