Expect it to be even more powerful than the SF90.

With its electrified 4.0-liter twin-turbo V8 generating 986 hp and 590 lb-ft, the Ferrari SF90 Stradale is the most powerful road-going Prancing Horse ever made. However, in a few years, Ferrari will launch a new halo hypercar designed to replace the LaFerrari.

Earlier this month, our spy photographers caught Ferrari testing a mysterious prototype believed to be the LaFerrari's future replacement. Now, we get to see Ferrari's new halo car in action on the track in an extended video. The prototype was spied undergoing testing at Ferrari's Fiorano test track in Italy.

Testing still appears to be at an early stage since the prototype is a mule based on the old LaFerrari Aperta, but there are some interesting design differences. At the front, the camouflaged LaFerrari has a completely different front bumper without a central fin that separates the grilles.

It's also missing the LaFerrari's central hood air vent and the side air intakes have been redesigned. Other modifications can be seen at the back, as rear glass for the engine cover is noticeably shorter and the rear bumper and air vents on the rear fenders have been revised. Even the wheels look different, with the prototype riding on five-lug wheels instead of the LaFerrari's center-lock wheels.

As for the soundtrack, the prototype sounds similar to the V12-powered LaFerrari as we get to hear it rev for several minutes before lapping the track. Stickers applied to the body also confirm the powertrain is electrified. Ferrari's new halo car will need to have more power than the 986-hp SF90, so we're expecting it to have over 1,000 hp on tap. This will also make it more powerful than the LaFerrari, which produced 949 hp and 664 lb-ft from an electrified 6.3-liter V12 back in 2013.

Ferrari's new hypercar isn't expected to arrive until 2023, ten years after the LaFerrari debuted. Before then, Ferrari is expected to lift the wraps off the new V12-powered 812 GTO later this year. 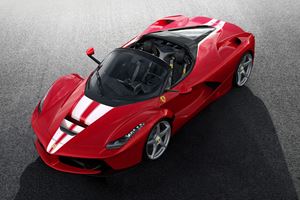