But leaves us in the dark about its displacement.

De Tomaso recently began a teaser campaign for the all-new De Tomaso P900 hypercar, with its second teaser now confirming that there will be a V12 at the heart of it.

While the first teasers included hashtags for V8, V10, and V12, leaving us somewhat confused, the latest batch of imagery shared on the company's social media shows blueprints for a V12 engine - or possibly even two - and reveals more of the sultry hypercar's bodywork.

The post has confirmed the newcomer will be called the P900.

The confusion over the P900's engine displacement, or how many engines will be available, stems from the fact that two blueprints in the post reference two different displacements. In both, a 60-degree V12 is mentioned, but while one indicates a 4,785cc displacement, another suggests a nice round 5,000cc. However, the V8 and V10 tags still remain in the post.

While previous teasers showed us intricate details of the car, the latest batch gives us a more holistic idea of what the car will look like. The rear end conjures up imagery of Le Mans racers and futuristic concept cars, thanks to the voluptuous rear quarter panels that flow into the engine cover. All of the bodywork is exposed woven carbon fiber.

The two round taillights embedded in these gorgeous design features are reminiscent of jet thrusters, while a curvaceous rear cowl includes LED light strips - presumably brake lights - and flows seamlessly into a two-element, top-hung rear wing. De Tomaso lettering is placed prominently and flanked by a pair of mighty exhaust pipes. The engine will clearly be placed amidship, with a carbon fiber engine cover sporting six ventilation holes.

Overall, there's a resemblance to the existing P72 and a subtle hint of Lotus Evija to the rear.

The purple-tinted carbon fiber bodywork looks exquisite and should keep the P900's weight down. To keep costs down, we wouldn't be surprised if De Tomaso retained the carbon fiber monocoque chassis derived from the Apollo Automobil Intensa Emozione. This seems likely as one of the hashtags in the post is #GermanEngineering, and Apollo Automobil is based out of Denkendorf, Germany.

The chassis underpins the aforementioned P72 however, should De Tomaso use it for the P900, we can expect a handful of revisions to be made.

The P72 is limited to just 72 units at a base price of $1 million. Whether this will be more or less exclusive remains to be seen

All will be revealed on 29 November when the covers come off this Pagani Utopia rival. 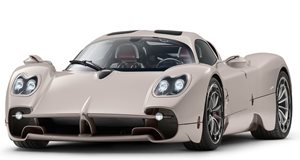