We hope this is NOT the final design.

Based on recent spy shots, Genesis is working on a facelift for its entry-level G70 sedan. The 2021 Genesis G70 is expected to use carryover engines including a 2.0-liter turbocharged four-cylinder and 3.3-liter twin-turbo V6 with minor power bumps over their current 252 hp and 365 hp outputs. On the interior, expected upgrades include a larger touchscreen infotainment system. There is even a shooting brake variant in the works.

But before Genesis had a chance to reveal the 2021 G70, leaked photos from Kagai Car Guy have appeared on Korean site Naver. As expected, the G70 facelift borrows design elements from newer Genesis models like the G80, GV80, and G90.

Some of the new design elements include a shield-shaped grille with mesh insert, split headlight design, split taillight design, and new front and rear bumper designs. These elements all blend brilliantly on the larger G80 and G90 sedans but here on the smaller G70, we think it's a bit too much. We'll have to reserve judgment until there are some clearer pictures but based on this first glimpse, this seems like the first design miss from Genesis. Perhaps the styling will look more cohesive in wagon form or with the sport package.

The G70 was already an attractive car that wasn't looking dated despite being on the market for several years now. Genesis obviously wanted its smallest car to match the design language of its other models but we think the company should have just taken an 'if it ain't broke, don't fix it' approach to the G70. 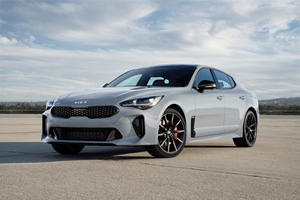