Inside, the compact sedan also gets one major upgrade.

Kia has been rejigging its nameplates a lot recently. The latest 2022 Carnival MPV replaces the previous Sedona and the previous Optima name was ditched in favor of the global name, K5, for the brand's stylish new sedan. Will the smaller Kia Forte - known as the Cerato or K3 in other markets - follow with a standardized name of its own in the near future? That's not clear at this stage, but new pictures of the facelifted Cerato/Forte have surfaced, at least giving us an idea of what this compact model will look like.

The images, shared online on the Bobaedream forum, give us a glimpse at the updated model's face as well as what looks to be a new digital instrument cluster. The front of the Forte shows off a new, broader Kia grille that now meets the headlight clusters. In the current Forte, the grille is separated from the headlights. Below this is what appears to be either a chrome garnish or sleek daytime running lamps that stretch all the way from the redesigned headlight clusters. It's evident that the look brings the Forte in line with the new K5. The lower bumper and the inclusion of the new Kia logo are other notable changes.

The image also denotes the use of a 1.6-liter T-GDI engine. In the existing Forte, a 1.6-liter turbo is already offered with outputs of 201 horsepower and 195 lb-ft of torque, alongside a rather underpowered 2.0-liter naturally-aspirated engine with 147 hp. Last year, the all-electric Kia Forte was confirmed for the Chinese market, but there remains no sign of whether this version will ever make it to our shores. Kia itself has also not announced details of the facelifted Forte seen in the leaked pictures. We expect it to be sold as a 2022 model following a light update for the current 2021 version on sale in the US. If the K5 is anything to go by, the new Forte (or Cerato/K3) will be a much flashier sedan. 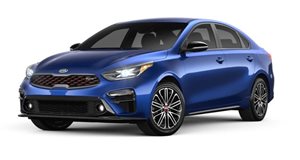