LEAKED: This Is The Alfa Romeo Tonale

Back in March at the 2019 Geneva Motor Show, Alfa Romeo presented the Tonale, a stylish compact crossover that will slot below the Stelvio SUV. Because the world clearly needs more crossovers right now. While the Tonale shown at Geneva was a concept, Alfa Romeo has already confirmed it will enter production. And now thanks to leaked photos, we know exactly what it will look like, and we like what we see since it looks very similar to the gorgeous concept.

The original source of the leaked photos appears to be Italian car forum Autopareri, and Alfa Romeo refused to comment when we contacted them. Photos provided by Allcarnews allegedly show the production version of the Alfa Romeo Tonale finished in silver being compared to other compact crossovers like the Audi Q3, BMW X2, and Range Rover Evoque, which can be seen in the background.

Compared to the original concept, the production model sports larger, more conventional-looking headlights and a wider upper grille. It's a similar story at the back, as the taillights and rear bumper look larger and the exhaust tips have a more rounded shape, but the production model retains the original concept's full-width light strip. Overall, it's a very stylish-looking SUV as you would expect from Alfa Romeo, even if some of the design elements have been toned down. Elsewhere, the concept's slim side-mounted cameras have been replaced with traditional mirrors.

A photo posted by AllCarNews also allegedly gives us a first look inside the production Tonale's interior, which incorporates a fully digital instrument cluster and a touchscreen display. In the concept, the digital cluster was 12.3 inches and the touchscreen measured 10.25 inches.

Powertrain details are still a mystery, but we know the concept utilized a plug-in hybrid powertrain. Potentially, the production version could use the same plug-in hybrid unit as the Jeep Renegade. The Alfa Romeo Tonale is expected to enter production next year and go on sale in 2021. 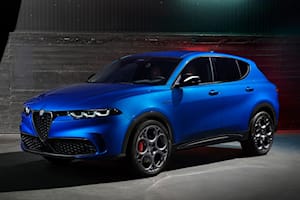