The Toyota Prius C city car was leaked recently from a brochure in Japan.

The Toyota Prius C city car concept made its debut some time ago at the 2011 Detroit Auto Show in January. The new city car joins the Japanese automaker's already expansive Prius lineup that includes the Prius, Prius+, Prius V and the Plug-in Prius. The Prius C was recently leaked out of Japan when some got ahold of a brochure and scanned the car. Copies soon circulated around the net which revealed the small city car in full.

Promised in Detroit to be the most fuel-efficient hybrid in the U.S., the Prius C is a small and compact car similar to the companies already available Yaris. Though the production version isn't as aesthetically pleasing as it looked back in concept form, the four-door Euro-spec model seen here isn't too far off to make a huge difference to potential buyers. The city car runs on a 1.4-liter 4-cylinder gasoline engine that has an output of 74hp. The additional electric motor adds an extra 61hp. You would think that this would mean that it would net 135hp, however Toyota has said that maximum output will be limited to just around 100hp.

The Toyota Prius C city car will make its international debut in two months at the Tokyo Motor Show in December. The baby Prius will make its North American debut the following month at the Detroit Auto Show.

You can also cack out all small cars of Toyota. 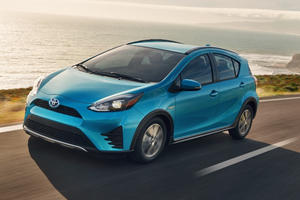 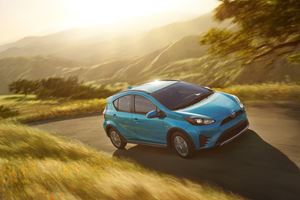