It's no secret that the Subaru Tribeca is checking out soon, but so far the automaker hasn't revealed many details regarding its eventual replacement. We know it'll be a three-row crossover of some sort, but a concept has yet to be revealed. Japan, however, will next year receive the production version of the Levorg concept, which just debuted at the Tokyo Motor Show. This sporty wagon features all-wheel-drive (of course) and a choice of two turbocharged engines.

The interior, as is typical with Subaru, is straightforward and simple. There's a 3.5" color display, a flat-bottom steering wheel and a total of seven airbags. Japanese sales will begin in spring 2014. While the Levorg remains in the Far East, Subaru's other concept also debuted in Tokyo. Called the Crossover 7, this could be the clearest preview yet of the slow-selling Tribeca's replacement. Specific details aren't available, but it does look to be larger than anything Subaru has made before. 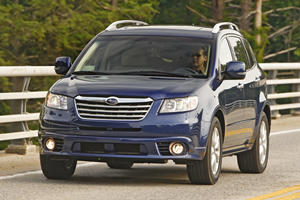