Lexus Has A BIG Reveal Coming Next Year

A new era is about to begin.

Major luxury carmakers Audi, BMW, Porsche, and Mercedes-Benz have either announced or revealed battery-electric vehicles. Some are already on sale. But what about Lexus, without question Japan's leading luxury carmaker? We were recently shown the LF-Z Concept that supposedly heavily previewed an all-electric model. Like the recently revealed Toyota bZ4X concept, Lexus is expected to use the e-TNGA platform. But the question still remained: When will it debut? Today, we have our answer.

Lexus has confirmed its first dedicated battery-electric vehicle will arrive in 2022. This completely new model still lacks an official name, but we highly suspect it'll be the production version of the LF-Z. It makes sense for Lexus to launch an EV crossover instead of, say, a sedan, because the segment is expected to keep growing at a greater rate.

We wouldn't rule out a Lexus EV sedan at a later date. Prior to the EV's reveal next year, Lexus has also committed to launching its first mass-market plug-in hybrid this year. The release didn't identify which model will receive this powertrain setup. If we had to guess, it'll be the next-generation RX, which was last completely redesigned for 2016.

Future electrified Lexus models will all feature a four-wheel-torque distribution steer-by-wire system called Direct4. The carmaker claims the system will enable a dynamic driving experience and a high level of performance. Of course, Lexus isn't stopping with its electrification push with these two models. It aims to offer electrified vehicle options for its entire model range by 2025.

Also by that time, it'll have launched 20 new or improved models, including at least 10 EVs, PHEVs, and hybrids. Lexus expects electrified models to outsell their pure combustion-engined counterparts within the next few years. The current rate of progress calls for Lexus to achieve carbon neutrality by 2050.

Along with these future product announcements, Lexus is marking the occasion of having sold 2 million electrified vehicles globally since 2005. The first Lexus electrified model was the RX400h, so it makes sense its first mass-market plug-in will also be the RX, which happens to be its best-selling model. We'll find out for sure in the coming months. 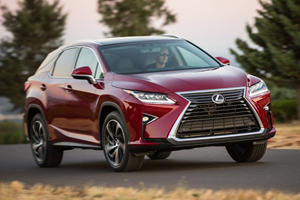