Lexus HS 250h Gets a Facelift

The first luxury dedicated hybrid may be gone from the US market, but it's still on sale in Japan, and has undergone a bit of an update.

A precursor to the CT 200h, the HS 250h wasn't exactly the runaway success Lexus had hoped for. Based on the Toyota Avensis and introduced in 2009, the HS was the first dedicated luxury hybrid on the market (predating the FIsker Karma by a few years), but failed to impress in the US market. So after a lackluster 2011, Lexus pulled the model out of its North American lineup. It does, however, continue to offer it in Japan, and as these images indicate, Lexus has also given it a bit of a facelift.

Redesigned to fall in line with the brand's more aggressive design language, the new HS 250h gets the company's signature spindle grille, with a black bar across the bumper for a similar look to the larger ES sedan. The rest of the design looks mostly the same, and the hybrid powertrain that combines a 2.4-liter inline four and an electric motor for 187 combined horsepower, likely carries over unchanged. When it was offered here, the HS 250h delivered 35 mpg in the city and 34 on the highway, making it slightly less economical (though more spacious and, you might argue, better looking) than the newer CT 200h. 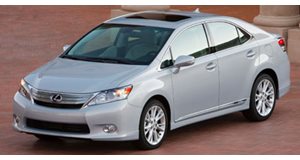