Lexus May Have Struck Gold With the New NX

Who would have thought that Lexus had it in them?

The first sign from Lexus that it was preparing to completely alter its character was the LFA, along with a bunch of radical-looking concepts. Everything was a far cry from the typical ES, LS and GS models. Then Lexus began to incorporate the edgy concept styling into production cars. Love it or hate it, Lexus' new styling language has attracted plenty of attention. With the recent unveiling of the new NX crossover, it's clearer than ever that Lexus has gone completely nuts – in a good way.

Compared to its upcoming competitors, say the Audi Q3 and BMW X4, the NX's exterior looks kind of like body armor used to enter a combat zone; it's obviously not for everyone. But is it really all that radical? After all, think back to the E60 BMW 5 Series with its "flame surfacing." What seemed radical then became mainstream when competing brands upped their design game. Perhaps the NX will prove that a compact premium crossover can have radical styling and get away with it. We'll know this for sure once the initial sales figures arrive. 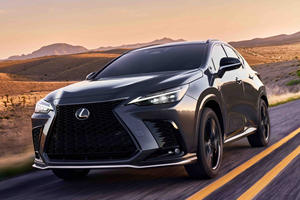