Toyota's luxury division pulls the wraps off its new sports sedan ahead of its official debut at the Detroit show next week.

With dozens of new debuts kicking off the new year, Lexus wouldn't want to miss out on the action at the Detroit Auto Show next week. And with the reveal of the all-new IS, it's sure to garner more than its fair share of attention. The new IS, revealed here in this first batch of images, adopts the design of the LF-CC concept into a four-door, production-ready form to take on the likes of the BMW 3 Series, Audi A4, Mercedes-Benz C-Class, Cadillac ATS and Infiniti's upcoming G-replacing Q50.

Pictured here in F Sport trim (not to be confused with the full-on IS F performance model), the new third-generation IS cuts a rather dynamic profile in white pearl with what looks like a rather sumptuous red leather interior. A longer wheelbase and wider track (along with thinner seat shells) make for a roomier cabin with a driving position designed to be even more conducive to spirited driving than its predecessors. The front end is obviously dominated by the brand's spindle grille that's being integrated across the model range, which is even more pronounced in the IS F Sport pictured here.

Further details are slated to be released once the car is fully unveiled in Detroit next week, but we're expecting the 2.5-liter V6 in the IS 250 and the 3.5-liter V6 in the IS 350 to be joined eventually by hybrid and IS F performance versions, with automatic transmissions driving the rear wheels or all four. Watch this space for more, but in the meantime check out the first official images for a closer look at the new IS. 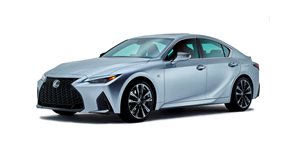 First Look
14
2021 Lexus IS First Look Review: Boldness Continues
It's not a complete redesign but there are numerous changes.