Automakers do their best to keep their plans under wraps, but secrets still slip out. Sometimes they're leaked by insiders, sometimes they're betrayed by spy shots and sometimes we get a glimpse from the patents and trademarks the carmakers have to apply for around the world in order to safeguard their products before anyone else even sees them. And that's what's happened here. Reports circulating the internet indicate that Lexus has filed trademarks for derivatives of the NX nameplate. But what kind of car would the NX be?

Considering that the X designation is used for crossovers and SUVs like the RX, GX and LX, the safe bet is on a crossover, and if speculation proves correct, we could be dealing with a new compact crossover. The Japanese luxury automaker has long been rumored to be working on such a vehicle to challenge the likes of the BMW X1, Audi Q3 and Buick Encore. The new model would likely be based on the Toyota RAV4, much as the RX shares its underpinnings with the Toyota Highlander. Deeper inspection reveals what kind of engines we could be dealing with, too. And it looks like the NX could have a little something for everyone.

Lexus has reportedly trademarked the names NX 200t and NX 300h, suggesting a new 2.0-liter turbo four in the former and the hybrid powertrain from the Camry and Avalon hybrids and Lexus ES 300h for the latter. Of course this could all come to nothing. Previous patent applications suggested the same vehicle would be called the TX, so we'll have to wait and see what Lexus has in store for us. 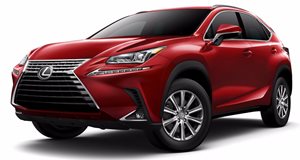