Lincoln hired away Cadillac's chief designer but will he be able to style a new Lincoln based on the next-gen Mustang's platform?

It's been hard watching Lincoln struggle to become something it may never achieve. The simple reason why success may not be possible is that Ford's luxury division spent too many years building cars the size of boats for retired people, also known as Florida citizens. But back in 2010 Lincoln hired away Cadillac's exterior design director, Max Wolff, in an effort to reshape the brand. At the same time, Lincoln announced plans to launch seven new models in the US by 2014.

Clearly that ain't happening, but only now are we truly beginning to see whether Lincoln's ballsy move against Caddy will pay off in other ways. First off, the new MKZ set record sales numbers for Lincoln in May, but the rest of the lineup isn't doing nearly as well. Why? Because models like the MKS and MKT are downright boring. As such, Lincoln will reportedly soon unveil a production version of the well-received MKC crossover concept that debuted at Detroit last January. There are also potential plans for a Focus-based compact sedan, but we all know that's not the best answer.

What Lincoln really needs is a rear-wheel-drive performance sedan based on the platform of the upcoming 2015 Mustang. When combined with Wolff's proven design skills, it has all of the signs of a winner. The main issue remaining, however, is whether Lincoln execs have the guts to build it instead of taking the safer (and likely less expensive) compact sedan route. Both cars could be done, but only one has the potential to be truly badass and a brand saver. 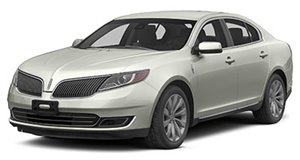