Will the Endurance pickup ever make it into showrooms?

Things were supposed to be looking up for Ohio-based startup Lordstown Motors. On paper, the Endurance electric pickup truck seemed to be a strong product and in early April, the first two beta trucks finally rolled off the production line. But the company's fortunes have once again taken a turn for the worse. Last week, it was reported that Lordstown did not have the cash to begin production of its truck. As if that wasn't bad enough, both CEO Steve Burns and CFO Julio Rodriguez have now abruptly resigned. The resignations are effective immediately and Becky Roof will take over as interim CFO.

This latest news certainly won't do much to instill confidence in a company that has yet to get a vehicle on the road. Shares of the automaker have tumbled by over 40% in 2021 and its market cap stands at approximately $2 billion. Shares slid by around 13% following the latest resignations.

Of course, there's also the issue of the company having been accused of faking the number of pre-orders it had received. Along with Becky Roof as interim CFO, Lordstown's lead independent director, Angela Strand, has been appointed as executive chairwoman. Strand would oversee the likely challenging transition until a new CEO can be found.

The dramatic resignations of Burns and Rodriguez come just before Lordstown's plans to speak to media, analysts, and investors at its Ohio-based plant. However, Strand has no intention of canceling these plans.

"We remain committed to delivering on our production and commercialization objectives, holding ourselves to the highest standards of operation and performance and creating value for shareholders," said Strand.

On behalf of the Board of Directors, David Hamamoto said: "Lordstown Motors has achieved significant milestones on the path to developing the first and best full-size all-electric pickup truck, the Lordstown Endurance. We thank Steve Burns for his passion and commitment to the company."

Even if the company does manage to right the ship and starts getting the Endurance pickup to customers, the arrival of the new Ford F-150 Lightning spells trouble for it. It remains to be seen where Lordstown goes from here. 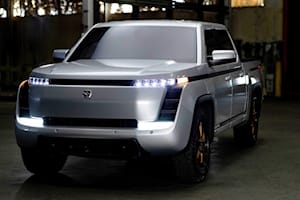