It'll debut in Tokyo next month, and could incorporate a rotary range-extender.

Automakers around the world have been scrambling to launch their own dedicated electric vehicles. And according to the latest, Mazda will be next.

The Zoom-Zoom brand, long known for developing unconventional and innovative powertrains, will reveal a completely new, all-electric vehicle at the 2019 Tokyo Motor Show next month. The word comes via Automotive News from Mazda spokesman Yoshikazu Nagai, who said that the new EV will be a "brand new model," not based on anything else it currently makes. And it could be the first Mazda to use a rotary engine since the RX-8.

Now if you're wondering why an EV would also need a rotary engine, you're on the right track. In markets like Japan, China, and Europe, the new vehicle would be a purely electric affair. But here in North America, where driving distances are longer, the vehicle is expected to use a Wankel engine as a range-extender, much like the two-cylinder motorcycle engine available in the BMW i3.

Mazda's prototypes have reportedly been running with 142 horsepower and 195 lb-ft of torque, juiced by a 35.5-kWh battery pack – smack-dab in the middle between the Hyundai Ioniq Electric's 28-kWh battery and the Nissan Leaf's 40 kWh.

The powertrain is reportedly being developed entirely in-house, separate from the consortium formed in 2017 between Mazda, Subaru, Suzuki, and Toyota's Denso component-supplier division.

The bigger question on our mind is what form the new vehicle will take. While prototypes have used the new CX-30 crossover as a test bed, and recent concepts –like the RX-Vision, Vision Coupe, and Kai concepts pictured here) have adopted different forms, the production model is expected to use an entirely new electric-vehicle architecture. In whatever body style it ultimately emerges, we won't be the least bit surprised to see additional electric vehicles to spin off from the same new dedicated EV platform. 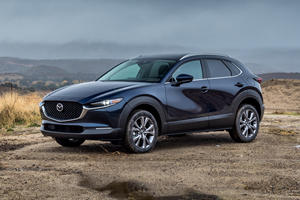