Mazda Has A Strong Message For America

Mazda has big expectations for its new outdoor-focused CX-50 crossover. One goal is for it to help the Japanese automaker double its annual sales in North America with an additional 150,000 units over the existing 130,000 or so. The CX-50, due in showrooms early next year, might be the ideal model to help make that happen thanks to its SUV-like styling and standard all-wheel drive. An MSRP expected to be just under $30,000 also won't hurt.

But Mazda North American CEO Jeff Guyton has another message he wants to get across: the CX-50 is made in America at the carmaker's new facility in Alabama, a joint-venture project with Toyota. "We want to make clear to people that the [CX-50] product is designed primarily for North America and we employ a lot of people," Guyton told Automotive News.

"There is a pride point around that facility that goes beyond just building a new car." Having a massive US-based factory sends a strong message that Mazda is not only committed to the US market, but it's also investing heavily in it. Later on, a hybrid CX-50 will also launch, making it Mazda's first-ever hybrid model. It recently launched the MX-30, the firm's first pure battery-electric. It's also available with a plug-in hybrid setup that's definitely more suited to American driving distance standards.

But the CX-50 should open the brand to a new market segment currently dominated by the likes of the popular Subaru Forester and Jeep Cherokee. One thing is for certain though: the CX-50 will no replace the CX-5, currently Mazda's best-selling model.

"The CX-5 is going to stay," Guyton confirmed. "The [discontinued] CX-3 was just too small for the US. I'm not looking to replace the CX-5 with the CX-50. I very much want to take more of that 3 million-unit segment."

Mazda won't remain in the combustion-engine-only club for long. Under Guyton, it's aiming for a "multi-solution approach" to electrification that'll include hybrids, PHEVs, and, eventually, more EVs.

Mazda is taking its time with the latter because it feels the US needs to upgrade its electric grid before mass EV adoption. Before that happens, some of Mazda's next-generation models will be underpinned by its new rear-wheel-drive-based large platform architecture designed to accommodate a PHEV system and an inline-six engine. The combined power of the US-built CX-50 and those future larger models will hopefully get Mazda to its goal of 450,000 units annually in America. 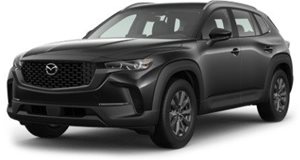