The McLaren 720S is one of the best modern supercars on the market, so it isn't surprising that aftermarket tuners have been offering new takes on the Super Series. Tuners also seem to love customizing the topless McLaren 720S.

Last year, Novitec took the McLaren 720S Spider to a new extreme with a massive power boost and exterior enhancements. Now, Russian tuner TopCar has unveiled its new tuning package dubbed the McLaren 720S Spider Fury. With more than 50 new high-quality carbon fiber components, the Fury kit is one of TopCar's most complicated tuning projects yet.

At the front, TopCar has added a new carbon fiber front skirt insert, a modified air scoop mount, a multi-piece spoiler lip, and a new front panel with gills on either side. At the rear, the tuner has fitted a new diffuser, trims for the engine cover, and a striking rear wing with two fins inspired by TopCar's shark logo. All custom exterior components are finished in visible carbon, giving the McLaren 720S Spider in contrast to the dark green exterior paint of the first completed example shown in photos.

Inside, the reupholstered seats, center console, and door panels are wrapped in Alcantara and leather materials, while the interior's black and green color scheme matches the exterior. While this first example doesn't have any powertrain upgrades, TopCar can tune the 4.0-liter twin-turbo to produce between 800 and 900 horsepower.

That's a significant power boost over the stock McLaren 720S Spider, which has 710 horsepower and 568 lb-ft of torque. Power is sent to the rear wheels through a seven-speed automatic transmission. All upgrades are available for the McLaren 720S Coupe and Spider. As for pricing, TopCar's new McLaren 720S body kit costs €66,610 ($71,117) for the complete kit and €83,262 ($88,866) for the more extensive stealth kit. That's of course on top of the actual car itself. 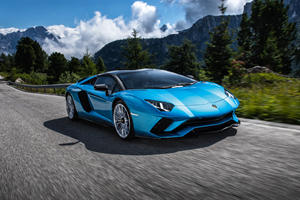